By the time I realized what the kids were doing while I was editing my novel, it was too late. So I just let them finish. They said, "You look like a princess, mom. But your eyes look like a witch." 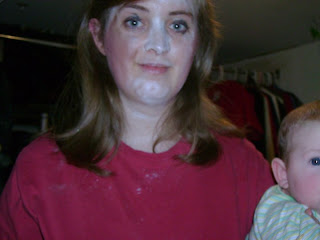 Yes, the kids found my makeup. And I was so focused on my editing (Chapter 6! We're moving right along here, folks) that I didn't clue in to what they were doing until I was partially decorated like a...well....they said they were making me into a princess.
The results on the page weren't quite so...amazing. At least, I hope they weren't. See for yourself:
Chapter 6
It still didn't explain where she was or how she got there, though. Kate needed to call Michael. He'd know where she was. Besides, if she'd hit her head hard enough to forget where she was, he'd want to know. He'd probably even come over and bring her a bottle of water.
Ahead, the trees grew taller and farther apart. Between them, Kate glimpsed what looked like sunlight glinting off water.
She was just opening her mouth to ask Tom if she could borrow his phone to call her brother when she was interrupted by a woman shouting, “But you are too stupid to know what to do with an eye!”
Kate jumped, grabbing Tom’s arm. “What was that?” she cried softly.
“Shhh,” Tom replied, putting a finger to his lips and stepping behind a large tree. “I think it’s just Row and Weenie. They’re as good as blind, so if we’re quiet, we’ll be perfectly safe.”
Kate didn’t let go of his arm, but froze and listened. What was a rowing wee knee?
Another woman shouted back at the first. “Yeah, well after your brilliant idea to snitch carrots from Loopy’s garden, you wouldn’t ever have seen anything ever again if I hadn’t thought of stealing this eye from the sea witch.”
Kate looked at Tom questioningly. Stealing an eye? From a witch? This really had to be a dream. It couldn't possibly be real, and it was too completely outlandish to expect that every single person they met, even by accident, was involved in the same game!

Kate peeked out from behind the tree. Two mud-coated women were standing in the middle of a large, shallow pond.
“Well, we all know who the prince was going to marry before the ball happened,” the first woman said.
The ball—and the prince?
They really just said that, didn't they?
Ball.
And Prince.
Like in “Cinderella.”
Like they were the ugly stepsisters.
It was ridiculous.
It was unbelievable.
It was like a story Uncle Stan would have told.
Kate paused, letting that last thought sink in. He'd always told his fantastical tales as if they were true. Like he had experienced them himself. Even when he was talking about characters from stories, like Captain Kidd.
Or like Tom, who was a piper's son. Just like in the nursery rhyme.
Kate looked at Tom, who was peeking out from behind the tree, watching the two women. They were holding a long-handled net, like a butterfly net, and staring down at the water.
“Who are they?” Kate whispered. Surely he wouldn't say, “Cinderella's Stepsisters,” would he? That would be too weird.
“The tall one is Row. The other is Weenie,” Tom whispered back.

Not Cinderella's stepsisters. Kate breathed a sigh of relief, but then caught it back. Perhaps Cinderella’s stepsisters had names beside “ugly” and “wicked”? Certainly their mother would have given them names....
“Their names are Row and Weenie?” Kate asked. “Who in their right mind would call their daughter Weenie? That’s what you said, right?”
“Nobody in their right mind would. But their mom isn’t in her right mind. Never has been. The girls’ real names are Sparrow and Rowena. Their mom called both girls Row for short until Sparrow was old enough to throw a fit about it. So Row number two became Weenie, since Row number one refused to be called Spare. At least, that’s what my dad says.”
Kate stifled a giggle. “You made that up.”
“It’s all the truth,” Tom said with a grin.

“Get back to work,” Row said to her sister, wiping more mud onto her dress, as if that would help clean her hands of it.
“I can’t get anything done when I let you see for both of us,” Weenie whined, swinging the net in wide, random swoops.

“Shut your mouth! You’re so loud, you’d scare any frog away,” Row snapped.
“If they’re blind, why are we hiding?” Kate asked.
“They aren't exactly blind. They share one eye that they stole from a sea witch. One of them can usually see with it,” Tom whispered. “And they can both hear.”

“How can they share an eye?” Kate asked. She couldn’t decide if that was disgusting or ridiculous.
“It’s a magic eye,” Tom said. “My dad says the sea witch got it from a fish she ate for dinner one night, and if Row and Weenie had half a brain between them, they could use that eye to see the past and the future.”
He just said the word. The word that had been tickling the back of Kate's mind for a few minutes now. Magic.
“Really?” Kate asked. The one-eyed fish story sounded familiar, but she couldn’t quite place it. Maybe one Uncle Stan had told?
Uncle Stan, who'd always said magic was real, and she'd always laughed at him for it.
In the pond, Weenie started swinging her net wildly, blindly trying to snag her sister, who stayed just out of reach. “Look, the Coalition won’t let us out of this swamp until we catch Phib, and you’re not making it any easier!” she shouted.
“Who is Phib?” Kate asked, breathless. A little buzz of excitement was growing in her stomach. Magic? Was real?  She pushed the thought away. It couldn't be. Could it?
“One of the last princes,” Tom whispered back. “All the rest have vanished over the last couple of months. We all kind of figured the witches had something to do with the princes’ disappearances. Now we know.”
“Do you want me to cast a spell on you?” Row demanded.
“I’ll cast one on you first,” Weenie replied.
“I’ve always wanted to get my hands on that eye,” Tom whispered. “And they are totally distracted right now. I bet I could sneak up on them.” Before Kate could protest, he stepped out from behind the tree and, moving slowly so he wouldn’t splash, started into the pond. Kate watched, holding her breath.
Tom was just about to grab the woman with the eye when the witch spun around. Shrieking, she pointed at him and said some mixed up Latin-sounding something. Tom instantly turned green and began to shrink, splashing into the water and out of sight.
Horrified, Kate screamed, “Tom!” and stepped out from behind the tree.
The witch sisters turned toward her, pointing, and then Kate suddenly had the uncomfortable sensation that she was falling out of her head. Reeling, she tried to focus her eyes, but everywhere she looked, the trees seemed to be growing rapidly. She really wanted to sit down.

Then she got congested. Not just in her nose--everything felt stuffy, from her eyes to her toes. Lurching forward as every muscle in her body cramped at once, she dropped to her hands and knees, and then everything was still.
She knelt there in the mud for a few minutes, stunned and wondering what on earth had just happened. Her muscles gradually stopped hurting, but the odd whole-body congestion stayed. She felt like she needed to blow her nose, and her fingers, and her knees, and everything else. She wanted desperately to get a deep breath, pop all her joints, and stretch, but she couldn’t quite manage it. It was almost like her whole body was having a mild asthma attack. Or like someone had shoved her into a sandwich bag and then shrink-wrapped it.
There were the sisters—giant now—and Tom had shrunk out of sight, and…had they shrunk her, too? How was that possible?
Kate tried to get a look at herself, but her eyes seemed to be on the top of her head, and her arms were green, and her fingers webbed, and…in a world full of fairytales, it could only mean one thing. Quietly, she crept over to the edge of the pond, dreading what she might see but knowing she had to look.
Her usual reflection was gone. In its place, wobbly but unmistakeable in the moving water, a green amphibious face.
They’d turned her into a frog.
Posted by Becca Jones at 3:18 AM