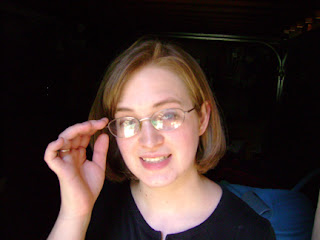 So I've had the same hairstyle for the last 26 years. Not an exaggeration. But knee-length hair is more than a pain, so I got 36" cut off. Also not an exaggeration. This is the new me, blow-dried and styled by the lady who cut my hair.

Today, I just washed it and let it dry, and I had something of a shock. Apparently my hair was being pulled straight by the weight. It's actually QUITE wavy. Who knew? And it naturally flips out. This was not what I had planned for. So now I look a lot like the lady on this logo. (I had copied the image here, but I want Caleb to go to that school, and one of their policies is that you can't use the school logo on a private web location....)

There are some things you shorthairs know that I'm learning. For example, drying off with a towel is all different now. When I move my head, my hair moves. This is a strange sensation for me. When I want to look over my shoulder in the car, I don't have to lean forward first (to release my hair). My hair "swishes", as Dan says. How do you brush short hair? It dries really fast (why would anyone need a blow dryer, anyway--it dries by itself in a few minutes!). It's thicker than I thought, and blonder (who knew?).

The most bizarre things: someone gave me a new shadow; and Tim looks at me different now, like it takes a second for him to realize who I am (I've looked the same the whole 15 years we've known each other, so no wonder....).

I like the new do. It feels like I'm wearing my hair up all the time, but without the headache the clips gave me sometimes. It'll take a while to get used to, though.

I'm trying to finalize the deal for the $2000 the ponytail is supposed to bring in, and then, after I receive the payment, I'll ship my hair.

I've had the same hairstyle for the last 26 years.

Wow!! I can barely keep the same hairstyle for a month at a time. (I cut it myself--always have.) I meant to grow long hair--I really did--but I got frustrated about a week ago and snipped off my ponytails. (Like you said: not an exaggeration.) So, in order to fix that unfortunate act of impetuousness, I had to trim everything until it was pretty much boy-length. So now I have the shortest hair I've ever had. And I don't love it, but it's my own fault, so that's what I get for letting myself anywhere near the bathroom mirror with a pair of scissors in my hands.