"Vetting" a candidate is doing a thorough background check to see if there is anything in the candidate's background that would disqualify them or make them unelectable or unlikely to win.

People say, "I can't vote for McMullin because he wasn't vetted."

This is just blowing smoke for several reasons.

2. The purpose of vetting is to figure out if there is anything in a candidate's background that would make them unsavory, unqualified, or unable to run. So what someone is saying when they bring this up is they can't vote for McMullin because there might be something awful in his past; he might not be "squeaky clean."  This coming from supporters of Trump and Hillary.... If having something in your background that is not all clean disqualifies you from running in this election, then we haven't got anyone left EXCEPT McMullin.

In short, if vetting is an issue for you, Trump and Clinton are disqualified on that point, too, both for the reasons that they have not been formally vetted and because they have unsavories in their backgrounds that should have disqualified them. 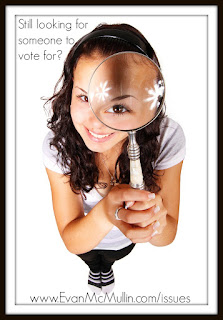 Edited: Sue Fritzler pointed this out, and I think it's important: "McMullin is the only candidate who has been fully vetted. The CIA vetted him and gave him top security clearances. The House Republicans vetted him when they hired him as their Chief Foreign and Domestic Policy Director, where, again, he had top security clearances. The primary process gave us Hillary and Donald, who 79% of Americans disapprove of and who both have either FBI, civil or criminal cases pending against them."
Posted by Becca Jones at 11:59 PM

Evan McMullin was thoroughly vetted by the CIA, who gave him top security clearances. He was also vetted by House Republicans when they hired him to be their Chief Foreign and Domestic Policy Director, where again, he had top security clearances.
Yes, Evan McMullin is the ONLY person running for President who has been thoroughly vetted.
The political primary process brought us Hillary and Donald, of whom 79% of Americans disapprove.

Evan McMullin is the only candidate for President who has been thoroughly vetted. He was vetted by the CIA, who gave him top security clearances. He was vetted by the House Republicans, who hired him as their Chief Foreign and Domestic Policy Director, again with top security clearances.
The primary process, on the other hand, gave us Hillary and Donald, who 79% of Americans have a low opinion of.