If God could close the mouth of the lions..... 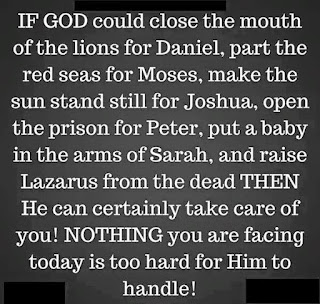 I saw this picture on Facebook today. It is supposed to be encouraging and faith-promoting.

But this is what I thought as I read it,

God closed the mouth of the lions for Daniel--after he was captured and taken from his home, castrated (why else would he be under the care of the master of eunuchs?), was threatened with death for being wise (and saved by a miracle then, too), had his best friends thrown into the fiery furnace (and saved by a miracle), and his coworkers had him captured for praying after they manipulated the laws to catch him. And then he was thrown to the lions, and God didn't stop that from happening. And he could have. But instead, he sent an angel to stop the lions' mouths--but Daniel still had to spend a night surrounded by hungry lions. Just because he was unhurt doesn't mean it was pleasant. But then he had to watch women and children be thrown to the lions and get eaten alive.

God did part the red sea for Moses. But first, Moses was taken from his family and raised by the king. He watched his people being tormented as slaves, killed a man in anger (defending his people), and his adopted father tried to have him killed. He fled his home country and lived in another land for many years in hiding, but then God sent him back to where his life was threatened. He was initially unsuccessful at freeing the people, and had to endure the 10 plagues with all the rest of the people in Egypt, was lied to by the king (and failed over and over and over at the task God had set him to do). Even though the Israelite children were saved, Moses had to watch all the Egyptian families suffer (remember, he knew these families, too, because he was raised as one of them) when their children died. He failed, and failed, and failed again to get the Israelites free, and when they were finally free, the Egyptians changed their mind and chased them with his armies. And then the people he rescued almost turned back because they were afraid of being killed. And THEN the seas were parted. Only then, after all that failure and suffering and murder.  And, like Daniel, there were other miracles along the way. But, like Daniel, Moses had to stand and watch the Egyptian soldiers, who were there on someone else's command, drown. Yes, they were free. But the cost was high.

God did make the sun stand still for Joshua. But first, he had to endure 40 years in the wilderness with unfaithful Israelites. And then he had to lead the Israelites through the whole country and conquer it, one city at a time (and with many miracles), teaching a bunch of long-term nomads how to be an army in the process. And after they'd fought many battles and been rescued by hailstones, and were under attack by many armies at once--then God made the sun stand still. And they still had to fight the battles. He just gave them extra daylight to do it in.

You get where I'm going with this.

Peter was freed from prison, but not until many of his friends (including Jesus) had been murdered. And not until he'd been in prison for several weeks.

Sarah got a baby--but only after waiting, barren, for decades and going through menopause first.

Lazarus was raised from the dead--after God not healing him from a sickness so bad that he died.

So yeah, he can take care of you. But don't expect that it will be convenient, or right when you want it, or without some fear and suffering and failure first. And often not until the nick of time--or after when it would have been good according to our ideas (surely Sarah would have suspected her chance was over--and it would have been more convenient to have a baby when she was not an old lady....)

No kidding! This is so entirely real life! My hubby and I were just talking about the idea that we all face our own versions of lions or giants or plagues or whatever, but in part it is because He wants our hearts. He wants us to turn to Him when it is hard, not just when it is easy. Makes me think of the beautiful words in Psalms 34:18 - "The Lord is nigh unto them that are of a broken heart." He does allow us to go through a whole lot and doesn't often show forth His power (which is real) until way after we would have picked, but He is there beside us to help us know that even in those moments He loves us and has us in His all powerful hands.